Eleke, Orisha, and color meaning in Santeria beads and necklaces by Everything Santeria

An article about Santeria beads 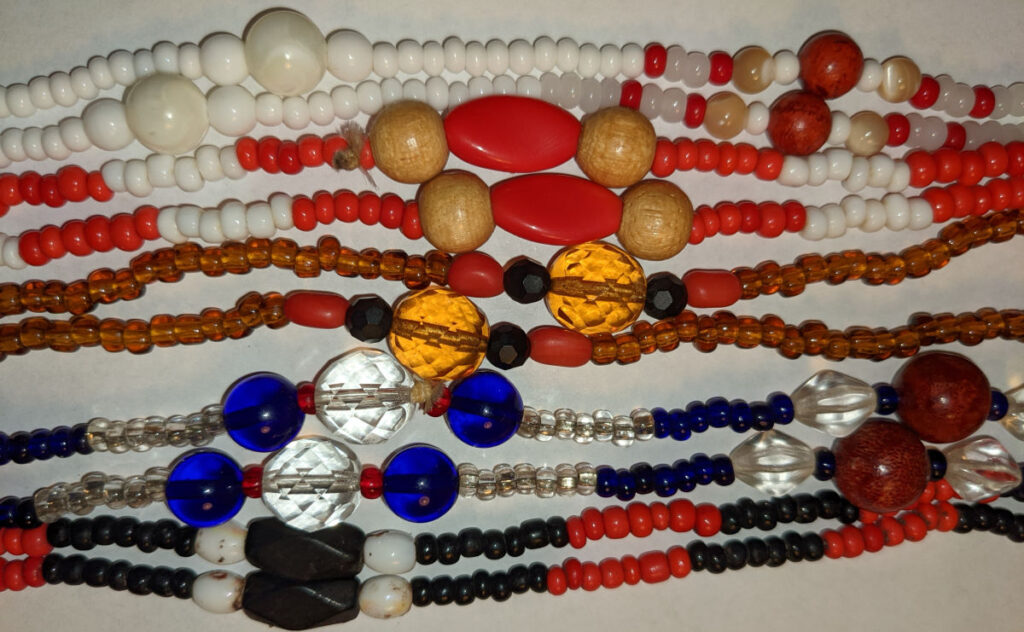 This article offers insights into the meaning of beads and colors in Santeria and Orisha worship.

I received my beads in 2001 after consultation with Elegba through divination.

The first reading with my future godfather did not close until Elegba said I needed Orisha in my life.

I received four elekes in a ritual that is often described as the baptism of Santeria.

The priests who prepared the necklaces came from a lineage of priests descending from slaves in Cuba.

I wear that history around my neck to this day and detail its significance here.

What are Eleke?
Eleke is the word used for beads by the Yoruba people of modern day Nigeria.

The Yoruba arranged beads in number and color patterns to symbolize deities known as Orisha.

The Orisha embody venerated forces of nature and are facets of God known as Olodumare.

Many priests of the Orisha came to Cuba and other regions of the Americas in the 1800s as slaves.

Priests who survived the middle passage brought with them knowledge of Orisha worship.

Today, Santeria practitioners wear necklaces with bead patterns of the Orisha inspired by their ancestors.

What is the meaning of Santeria beads color?
Each Orisha has a specific bead pattern that symbolizes characteristics of the Orisha.

The number and color of beads determines the pattern.

For example, the father of all the Orishas is Obatala.

The eleke of Obatala is made of white beads strung in groups of 8 or 16.

Variations in Obatala’s eleke represent different periods or roads of the Orisha’s existence.

For example, some roads of Obatala have white beads accented with red coral beads.

These variations in the eleke have corresponding myths and lessons.

A priest may prepare a particular eleke for a person experiencing a life lesson like in the myth.

What is the meaning of white Santeria beads?